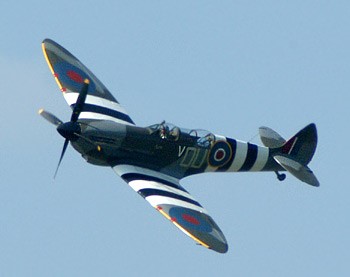 Last  year’s  75th anniversary of D Day has reminded us of what was achieved in those difficult days, especially in the skies above the south coast and Europe and that icon of the skies, the Spitfire.

Hydromar has been profiling parts for the repair and restoration of vintage aeroplanes, including Spitfires, almost since it started trading. It comes with its own unique challenges. Many original drawings are still available such as the MK XIX Spitfire instrument panel shown  below, dated 1943.  Its dimensioned in feet and inches and fractions down to 1/64inch ( fortunately modern CAD  can  deal with this at the  click of a mouse). By contrast, the Luftwaffe were producing metric drawings to three decimal places at the same time.

The dimensions start from an origin at the bottom centre of the panel and each aperture is dimensioned from the previous one, progressing clockwise. This was fine until a missing dimension meant the next aperture couldn’t be accurately located!

In the real world of wartime  production of Spitfires, this wasn’t a problem. After several attempts by the Luftwaffe to destroy the Spitfire production factories in Southampton,  they succeeded in Sept 1940. At that point Spitfire production was dispersed to many sites around the UK, to meet ever increasing demand. The paper drawings were used to make templates and the various parts for the aircraft were made to match the template. If the production factory hit a problem ( like a missing dimension  or a part not fitting exactly) the template would be made and adjusted to fit, and production would carry on. Officially 24 different marks of Spitfires were made, with many sub variants. Considering the likely variation between each production factory it would be a  fair assumption  that the surviving Spitfires of today are all probably unique.

Therefore, cutting a new instrument panel to match the drawing is unlikely to be a good fit in the cockpit. A process of cutting a plywood panel for test fit, modification of our CAD  drawings and a final cut in phenolic board ensured a good fit.

The above image is of a  different  variant  instrument panel that was recently  profiled.

In our  business  we often  say that the actual cutting is the easy  part,  its  all the activity around that – both prior to cutting and post  cutting are  where we make the difference  for our  clients.

We  have been privileged to work on parts for  many  vintage  allied  aircraft,   working with a  number of  clients.  Just  to  show that we are not  biased  we have also  cut an instrument panel for a Messerschmitt ME109 which was often on the opposing side in many  WWII aerial  combat exchanges.

This website uses cookies to improve your experience while you navigate through the website. Out of these cookies, the cookies that are categorized as necessary are stored on your browser as they are essential for the working of basic functionalities of the website. We also use third-party cookies that help us analyze and understand how you use this website. These cookies will be stored in your browser only with your consent. You also have the option to opt-out of these cookies. But opting out of some of these cookies may have an effect on your browsing experience.
Necessary Always Enabled
Necessary cookies are absolutely essential for the website to function properly. This category only includes cookies that ensures basic functionalities and security features of the website. These cookies do not store any personal information.
Non-necessary
Any cookies that may not be particularly necessary for the website to function and is used specifically to collect user personal data via analytics, ads, other embedded contents are termed as non-necessary cookies. It is mandatory to procure user consent prior to running these cookies on your website.
SAVE & ACCEPT